From afar, this looks like a deal made in heaven. French oil form Total will pay US peer Occidental $8.8 billion to acquire the African assets of Anadarko. Occidental’s takeover of Anadarko seems like a good opportunity for the French company to increase its already big presence in Africa. In Africa, Anadarko is present in four countries: Algeria, Ghana, Mozambique and South Africa, now slated to be Total’s. All these countries have tremendous upsides in their oil industries, but it will not be an easy journey for Total to control all aspects of business development there, as both politics and security could get in the way as we see in the case of Algeria and Mozambique.

First Algeria, where an anti-government protest that started more than two months ago is making the political risk outlook very difficult to predict, even for Total’s best analysts.  The company has been in Algeria for decades and works in diversified sub-sectors tied to the oil and gas business. Its biggest business is obviously its Total Exploration & Production Algérie unit, extracting hydrocarbons and selling it worldwide.  It is very lucrative and has been safe during the Bouteflika era.  But like everyone else, Total is now dealing with a popular uprising that no one predicted (except that we did!).  Total, as is the case for global corporations, tends to align its views on those of the French government. In fact, many say that Total has tremendous influence on how policies in international affairs are drafted with the offices of President Macron’s Élysée Palace and that of Jean-Yves Le Drian’s at the Foreign Ministry are wide open open to it. And the policy until February 2019 was to bet that the Bouteflika succession will go one without a glitch.  Turns out that was not the case.  France has been a supporter of Bouteflika, and when it became evident that he was the wrong horse to bet on, Paris essentially shifted its focus on who would best fill the void with Bouteflika out.  They picked his Prime Minister Ahmed Ouyahia, assuming that no one would challenge continuity, with so many “friends of France” in the Algerian regime. With the President’s Brother and intelligence officers in charge in the presidential palace in Algiers, the situation for a short while was under control. But it never was!  The emergence front-and-center of Algerian Defense Chief General Gaid Salah has complicated France and Total’s calculations so deeply that Paris has been looking for retired French Generals who knew Gaid Salah personally to see how they can create a channel of communications with him.  A certain panic has ensued in Paris because Gaid Salah has always been tied to the Russians instead.  Billions of Algeria’s petro-dollars have been spent on Russian military equipment, and in this context, swaying Gaid Salah is Paris priority these days.

But the move is extremely risky. Algeria has already signaled Total that changes are in the offing.  Several sources in Algiers say since the end of February, the Bank of Algeria has blocked the repatriation by Total of 73 million euros in form of dividends made in Algeria. The figure is not enormous for a company the size of Total, but it is enough for the bells to ring within the company’s HQ about headwinds blowing from Algeria.  Total is not staying idle and is reportedly sending a senior team to talk with Sonatrach and whomever else will listen. The company is also struggling with a $1.5 billion project aimed at producing propylene and polypropylene in the northwestern industrial zone of ​​Arzew. The project is now on standby and not making any progress.

So as Total figures out how to unpack all of this, its main problem with Algeria is the same one facing strategy folks in governments in Paris and elsewhere.  How to predict what’s coming next in Algeria?  The situation in the North African country shifted from a regime seemingly in control by the Bouteflika clan, which turned out to be a collapsing house of card, to what appears to be a showdown between the protest movement and some in the military, personified by General Gaid Salah.  If the optics suggest that there is a power struggle on who will take over the post-Bouteflika era, the choice of one or the other is no trivial exercise.  And then,it is possible that the street and the military will converge in terms of setting up an consensus future roadmap, further clouding the analyses taking place in comfortable corporate settings in Paris, Houston or Rome.

In the southern Africa region, Total will inherit a massive project in Mozambique’s northern region of Cabo Delgado.  The Rovuma basin could be one of Africa’s biggest gas projects, and Anadarko has been instrumental in putting it together.  Total certainly has great interest in ensuring its success as marketing deals have been signed with buyers in places like Asia. Although it may be facing lesser political uncertainty than in Algeria, Mozambique is facing unprecedented challenges that are likely to keep risk analysts in Total extremely busy for a long time.

On the political front, the country has been progressively moving toward peace with the government and rebel group Renamo agreeing to end their feud.  A final peace deal has not been fully reached, but steps have been made, including a ceasefire that both have been respecting.  A presidential election is scheduled for 15 October 2019, and that would be a huge test to assess Mozambique’s appetite for peace.

There are other problems, including Mozambique’s exposure to natural disasters.  The country was hit by two devastating mega-cyclones over the past two months, with Cyclone Idai hitting the central region, and Cyclone Kenneth devastating the north, where the Rovuma basin is located.

But all of these are a lesser problem when once considers the escalating terror attacks that have been taking place since late 2017.  Ironically, these attacks emerged when Mozambique officially announced that gas production will go on, as if the insurgency followed the gas industry hand-in-hand.  Cabo Delgado has been struggling with small-scale attacks on villages in the region, creating population displacements, and attacks have accelerated in the first half of May 2019, as indicated by the maps below.  An Anadarko Italian contractor was also killed, prompting the company to halt its operations until the government boosted security and provided some guarantees. But as Total’s venture in Mozambique begins, there is no sign of insurgents easing their pressure on the region.  Maps below show the extent of their attacks, and it is unlikely that they will stop now.  What is puzzling in this case is that the Mozambican government says that the attackers are “criminal gangs,” in contrast to what some media report as an “Islamist insurgency.”  Just last week, President Filipe Nyusi pleaded with the insurgents to come clean and make their demands known. But there are all sorts of theories as to who the attackers are, which Total will have to understand very quickly.

The road ahead for Total in Africa is paved with gold [black gold], but with uncertainty, obstacles abound and risk remains high. 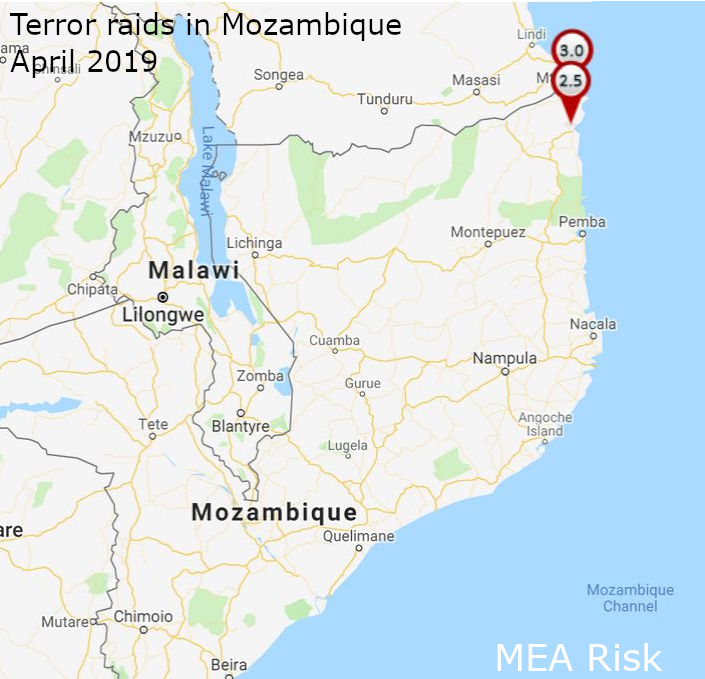 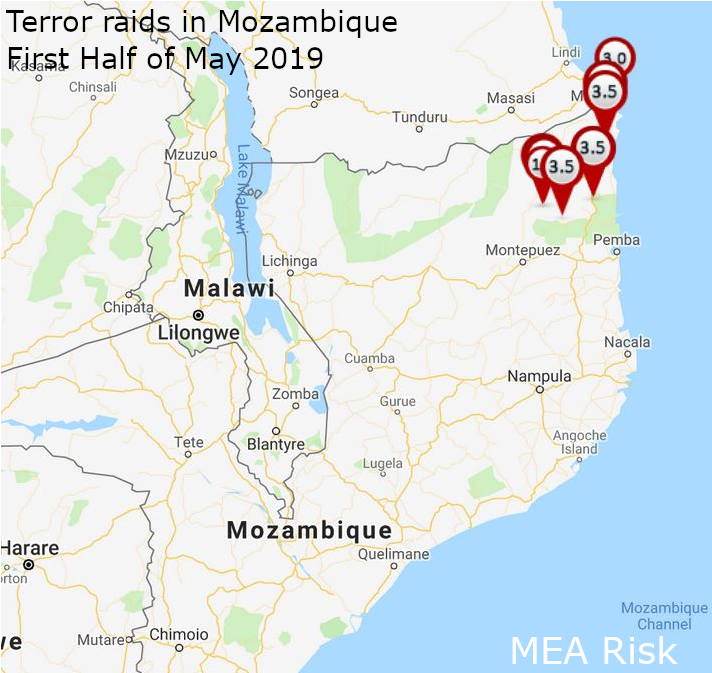 Terror attacks in Mozambique first half of May 2019