Nigeria: As primaries end, competition between parties to intensify, and violence likely

For the period of 8 to 14 October 2018, there were 41 critical incidents in Nigeria, resulting in at least 124 deaths and 113 arrests.  Both the Social/Human and Economic categories accounted for nearly 27% each of the total incident pool of the week. At least eighteen soldiers were killed, eight battling to survive at the hospital after being critically wounded and about 157 feared missing when Boko Haram insurgents raided an outpost of 157 Battalion in the Borno state village of Metele.  Multiple military sources have separately confirmed that the death toll was far greater in severity than the military publicly admitted.  Some 157 soldiers are still missing. The army confirmed on Twitter that 76 insurgents were neutralized.

¨ The political environment in Nigeria remained tense, despite the official end of the party primaries. At the federal level, the ruling APC party continued to look for ways to remove Senate President Bukola Saraki from his seat. Saraki defected recently from the APC party to joined the opposition PDP, angering APC’s leadership and senators affiliated to his former party. The latter held an emergency meeting this week on how to go about his removal. The meeting’s details have been kept confidential. But Saraki has also been active as an opposition figure. Following an alleged attempt to arrest them for staging a protest at the National Headquarters of the Independent National Electoral Commission (INEC), several PDP officials, including Saraki, filed a lawsuit against the Inspector-General of Police, Ibrahim Idris.

¨ Meanwhile, scores of protesters from the three states of Kano, Niger and Nasarawa stormed the national headquarters of the ruling APC party on 8 October, to protest the outcome of primary elections. They accused the national leadership of the party of manipulating the elections and circumventing its own rules. In Lagos state police arrested 84 people allegedly involved in violence during the just-concluded APC governorship primaries.

– Nigeria’s National Emergency Management Agency (NEMA) declared on Thursday, 11 October, the five states of Adamawa, Taraba, Kebbi, Bayelsa and Rivers as “national disaster areas” as a result of the incessant flooding that has ravaged several LGAs in those states. This brings the number of states in dire need of support to nine.

– At least 17 people have been killed in renewed hostilities between the communities of Bassa Kwomu and Egbura Mozum, both located in Bassa LGA of Kogi state.  Surviving residents in several nearby regions have fled for fear of being attacked in retaliation.

¨ The IMF has cut Nigeria’s growth forecast for this year to 1.9 percent, down from 2.1 percent. It said the country’s economy is performing poorly. It also warned that Nigeria’s current sovereign debt servicing obligation was becoming unsustainable compared to its revenue generating capacity.  Despite the heavy debt burden, President Buhari reached out to the Senate this week seeking authorization to raise more debt to pay for the 2018 budget. Buhari is looking to issue more than $2.7 billion in Eurobonds.

This week’s Boko Haram raid on a military base in northern Borno state highlights the challenges facing the military in containing the devastating activities of the insurgent group in the region and in the greater Lake Chad basin.  Despite tremendous efforts deployed by the military and the support Nigeria is receiving from its foreign partners, containing Boko Haram is turning out to be a much more difficult task, and a tough promise to fulfill by the leadership of the country.

Not only Boko Haram has been able to unleash asymmetrical warfare with suicide bombings and the targeting of crowds, but the insurgents have also been daring the military directly with large scale attacks as we saw this week in Mozum, Borno.  The attacks are an affront to the Nigeria defense and political leadership, which has been insisting that Boko Haram has been defeated. So much so that in this most recent attack, the military minimized its information sharing, as various confidential sources reported much greater death tolls.

While Boko Haram will continue to inflict losses on the Nigerian military, the country remains without a solution to the pastoral crisis affecting several central regions. More violence and herdsmen-farmers clashes are likely. The military is also expected to retaliate with more fire power, perpetuating a crisis that could be solved through political will and dialogue.

However, on the medium term, violence will also come from the country’s political environment. The recently concluded party primaries have generated a great deal of violence, and their violent aftermath continues to be felt.  More violence is likely as competition for political posts intensifies.

The decision to include five more states in the national disaster list of states affected by floods is indicative of the widespread destruction in many LGAs and regions in Nigeria.  Heavy rains and floods have wrecked havoc on communities, with the loss of live continuing into the month of October. This year could be one of the toughest on record related to natural disasters in Nigeria. Risk of water-born diseases is also growing, while the country is confronted with degrading infrastructure and weakening response capabilities.

The Nigerian economy is headed toward turbulent times, with the IMF seeing the country’s economic growth reduced to a meager 1.9% this year, as the Central Bank warned of the potential for growth contraction to take place. The IMF also sees Nigeria’s debt burden as unsustainable, and yet authorities continue to seek new debt, by issuing Sukuk bond and requesting senate approval for a near $3 billion Eurobond. 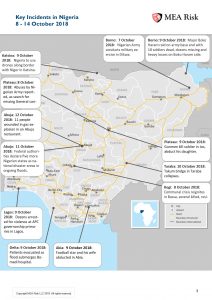