Mozambique: Back to uncertainty as opposition leader dies before conclusion of peace talks

MEA Risk –  May 16, 2018: News and political life in Mozambique over the past fortnight have been largely dominated by the unexpected death of Renamo leader Afonso Dhlakama on 3 May 2018.  Dhlakama, one of the two top players in the ongoing peace talks, along with President Nyusi, died of diabetes complications before he could be evacuated from a Renamo military base in Gorongosa for medical treatment in South Africa. The death of Dhlakama, who was laid to rest in his remote birth village on 10 May, threw the country’s peace process into uncertainty, with most analysts fearing that a leadership crisis within Rernamo could threaten the work achieved so far in the peace talks.

For the period of 1 to 15 May 2018, there were 40 critical incidents in Mozambique, resulting in eight deaths, including that of Renamo leader Afonso Dhlakama, and 30 arrests. Incidents related to the Domestic & Regional Politics  category accounted for 35% of the total incident pool, as a result of Mozambique being thrown into uncertainty with the death of the Renamo chief.  Criminality accounted for 25%.

Renamo appointed Ossufo Momade as the interim leader to temporarily replace the late Afonso Dhlakama.  Momade will lead Renamo on the temporary basis, during one of the most important periods of its history, until a permanent leader is selected. The challenge for Renamo now will be to find a personality that could fully replace Dhlakama, a process that is fraught of risk.  Still, President Nyusi and top leaders of the ruling Frelimo party pledged to drive the talks forward and promised to cooperate with the next Renamo leadership.

Mozambican police announced that they were sheltering three women in Nangade who had escaped from the hideout of one of the groups responsible for the armed attacks on villages in that part of Cabo Delgado province. Also with them were at least three children.

Former policemen, expelled from the Mozambican police force, were reported by the Mozambican press as having assisted and trained the insurgents who have been targeting the northern province of Cabo Delgado. The information comes from two independent research bodies, the Institute of Economic and Social Studies and the Civil Society Support Mechanism, which makes the alarming claim that the insurgents have training bases both inside and outside the country.  Meanwhile, authorities in Cabo Delgado say that everything is under control, a claim that many observers reject.

Five people were killed after a boat sank on 6 May in the northern Mozambican province of Cabo Delgado. Authorities say overcrowding and over-loading caused the shipwreck

The Mozambican police arrested 17 people following violent rioting that took place in the last weekend of April in the town of Manhica. The angry mob attempted to lynch a local businessman, accused of trafficking in human body parts, and caused damage and destruction.

The political risk in Mozambique has worsened by a notch with the death of Afonso Dhlakama, one of the two most important protagonists of the peace talks in the country.  Having failed to fully prepare for his succession, Dhlakama leaves the Renamo party, and Mozambique in general, without a clear roadmap for a smooth transition. Despite pledges from the leadership of the opposing party, Frelimo and the government, include from the President himself, there is a risk that Renamo could follow the path of destabilization, should a leadership crisis happens.  The appointment of an interim leader is the right step but is only the first step. The death of Dhlakama could also reignite violence from forces that oppose a political solution to the conflict. The coming three months will be crucial to Mozambique, as these issues are sorted out.

On the social/human front, superstitious believes remain a major problem in the Mozambican society, with violence erupting over issues of the sell of body part, as was the case north of the capital of Maputo. The riots resulted in 17 arrests, and highlight the role superstitious believes play in the Mozambican society. While criminality is relatively low in Mozambique, in comparison to African countries with the same level of economic development, Mozambique will continue to witness continued moderate levels of kidnapping, murder, and other types of criminality.  Drug trafficking and the illegal destruction of natural resources for commercial purposes will remain a major focal point to authorities going forward.

On the economic front, there has been no major release of macro economic data over the past fortnight, confirming that the fundamentals of economic outlook have not changed.  Mozambique will continue to struggle domestically, despite the countries on its way to building a major natural gas hub in Cabo Delgado.  The trickling effects of the Rovuma gas project will not be fully felt for several years, while Mozambique struggles to convince its international partners to resume their activities in the country. The death of Renamo chief Dhlakama represents another wildcard in the economic outlook, with investors remaining uncertain as to the stability of Mozambique in the coming months and years. 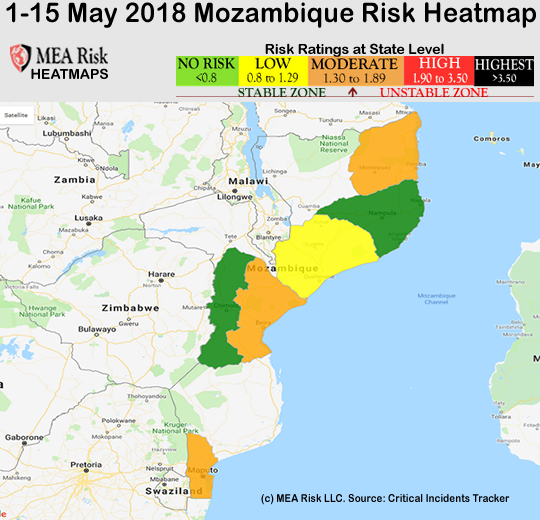