Insecurity in the gas-rich region of Cabo Delgado has intensified over the past fortnight, ending 15 December 2019.  Attacks by insurgents took place in the village of Litingina in Nangade district, in Matapata near the industrial facilities of the Rovuma natural gas project, and in the villages of Ingoane, Ilala and Nacutuco, all in Macomia district. There was also a confrontation between insurgents and soldiers in Olumbi village in Palma district. The worse attack took place on 6 December, when insurgents raided the Marere village at the Mbau Administrative Post, located in Mocimboa Praia. At least 13 people were killed there, although Islamic State group reported 16 soldiers killed.

The central regions near the city of Chimoio have also been battered by attacks on trucks and commercial buses. There were several deaths, in attacks largely attributed to a dissident faction of Renamo, known as the Renamo Military Junta. Most of the attacks concentrated on the Gondola region of Manica province. There is also a strong likelihood that attacks have been performed by elements in the government that seek to undermine the peace agreement reached between the government and Renamo. The latter has been insisting that the ruling Frelimo party and elements of the government have been fueling tension through death squads and militias in the center of the country in an effort to undo the peace deal.

The escalating violence in the north is prompting the government of Mozambique to look for more international support.  Already, there have numerous reports reporting direct involvement of the Russian private security outfit, the Wagner Group. The Russian government has been denying involvement, but there have been consistent reports that armed Russian operatives have been spotted in the region. Insurgents have also reported that the captured and beheaded Russian nationals.  These losses may have forced Wagner to take a brief pause to reassess, and it appears that it is already back on the ground in north Mozambique.

However, the government in Maputo is still in need of substantial help. The Ministry of Defense announced an agreement with the Indian government expertise to secure maritime territory, specifically related to the offshore area of Cabo Delgado, where natural gas related activity is underway. Maputo is also courting the French government to convince Paris to allow access to satellite imagery of Cabo Delgado to use in the country’s counter-insurgency campaign.

In all, for the period of 1 to 15 December, there were 43 critical incidents in Mozambique, resulting in 32 deaths. See incident map below.  A spike in insurgent attacks in the north and central regions, pushed the Terrorism category to 27.91% of the fortnight’s incident count, followed by the Human & Social category at 23.26%.

Other key areas to watch:

What to watch for Mozambique outlook:

The escalating violence on two fronts is cause of concern and Mozambique’s search for foreign support on the military front is indicative of the challenges facing the authorities in Cabo Delgado and to a certain extent in the central provinces.  Given the current environment, the unrest in these regions is not likely to subside and will probably escalate, putting in jeopardy the investments intended for the Rovuma gas project. In the center of the country, the peace deal that was reached by the government and Renamo appears near collapse. Attacks allegedly committed by the Renamo Military Junta do not appear to subside either and can cause further destabilization in the central region.

On the Social & Human Front:

Mozambique experienced the start of the rainy season with heavy downpours that have affected thousands of people in the central city of Beira.  Despite efforts to fix water evacuation and drainage systems, thousands of people were forced to leave their homes amid rising water and floods. Further south, the Maputo area is facing unprecedented drought, despite the heavy rains in the center. With temperatures exceeding 40 degrees centigrade, the region could face more severe water rationing going forward.

As expected, the latest economic data show a weak economic performance for Mozambique. Despite GDP growth in positive territory, the low single-digit rate for the third quarter signifies essentially lack of growth. Single-digit growth rates for an economy the size and scope of Mozambique would not have significant driving effect on general growth and development. Mozambique will need to produce at lease high-single to double-digit growth rates to enable job and business creation and help reduce poverty. 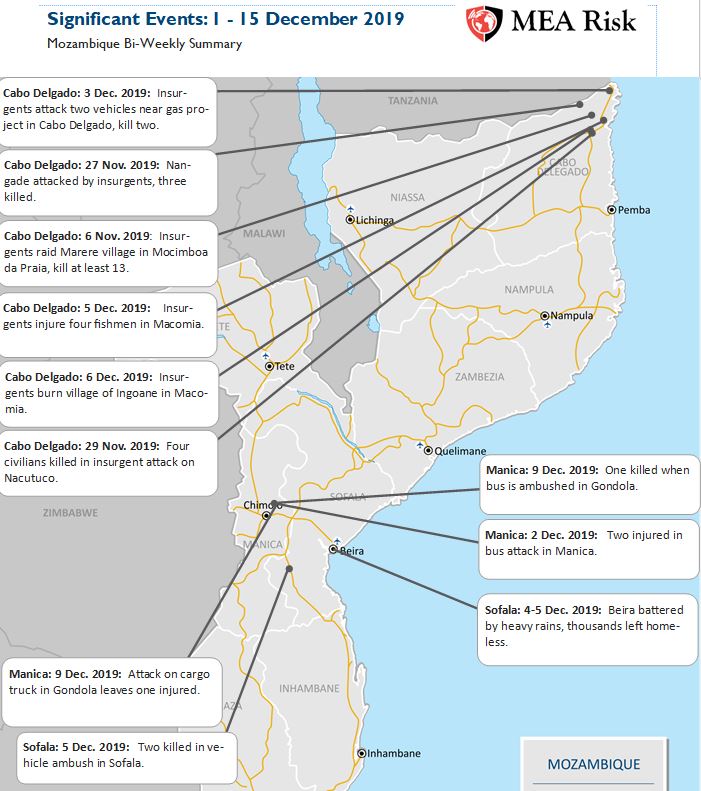