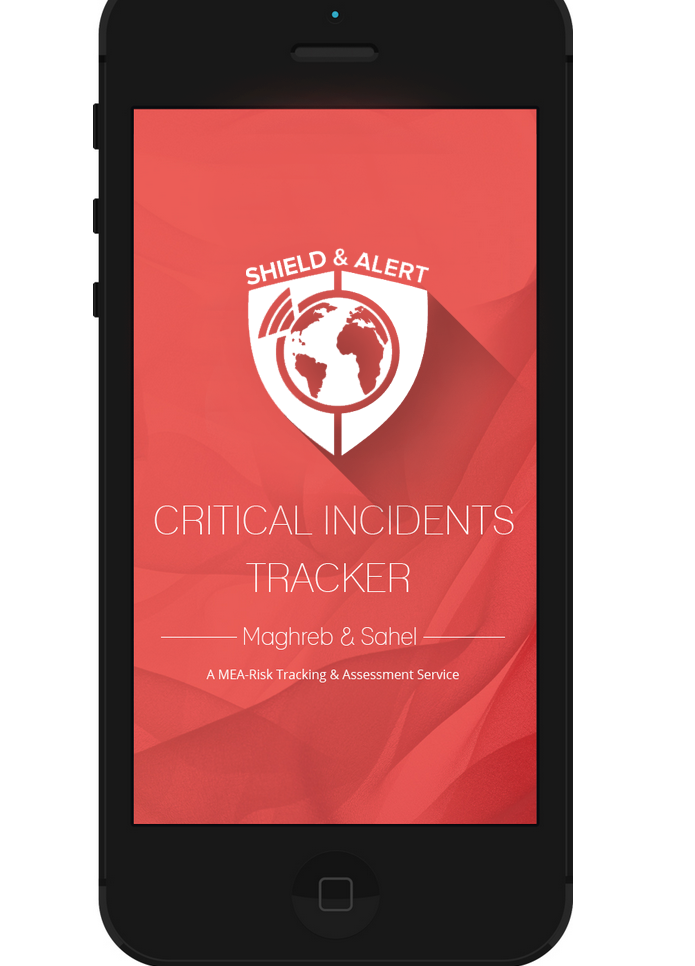 February 11, 2015:  MEA Risk LLC is pleased to announce the upcoming release of Shield & Alert (S&A).  S&A will leverage Critical Incidents Tracker and local, regional and remote Analysts to deliver security alerts and ratings of risk at the local level for clients traveling to or working in Africa. S&A is currently working to expand global coverage at the worldwide level.

Premium corporate security features are available for governments, companies and other organizations. Individuals will be able to download the app for non-Premium features.

Organizations (and their employees and customers) that would benefit from S&A include but are not limited to:

The first regions covered upon app release will be the Maghreb, the Sahel, Egypt and East Africa. Southern, Central and Western Africa regions are being developed and tracking will be available shortly after first release. Worldwide S&A will be rolled out progressively starting in the second half of 2015.

Key Feature: S&A will feature 24-hour coverage to alert clients on incidents that are taking place within the city of their location or beyond. The use of GPS will enable S&A to identify user location, then push the relevant information, such as the location and the severity of the incidents that happened or happening around them. Tracking and alerting occurs on the continuous basis.

App clients will be able to set their coverage area to expand or reduced it from its default 200 miles radius. Alerts will be released the moment they are recorded into MEA Risk’s flagship Critical Incidents Tracker database. Users can tweak their settings so as to hear audio alerts for specific profiles, such as a being alerted for any terrorist act rated 2.5 or above within 50 mile radius of current location.

The incidents tracked and subject of alerts include but not limited to terrorism, riots and demonstrations, police and military interventions, disease outbreaks, political crises, and other categories that could constitute a risk to individuals and organizations.

In an effort to leverage crowd sourcing, S&A will feature reporting capabilities that anyone can use. The Reporter feature will allow users to record an event they are witnessing, and report it either for worldwide broadcasting or to the attention of their corporate managers or security department.

The app will also feature outgoing distress alerts. The S&A’s Travel Registry feature will enable users to alert specific contacts about a potential trouble they may be facing. S&A will send the user’s contacts the distress message, along with the exact GPS coordinates.

S&A is built for the Apple iOS and Google Android platforms. Most features will function only with GPS capabilities and Internet access enabled in mobile smartphones.

MEA Risk expects the Beta version to be available on iOS in mid-March 2015, with the Android app to be released shortly thereafter.

To find out more and to remain updated on upcoming release and developments, visit S&A’s website and include your email address there.