For the week ending June 1, 2014, while there have been fewer “critical incidents” in the Maghreb/Sahel zone, the intensity of the events that took place during the week intensified.

Firstly, we have witnessed a reduction of 10% of actual events that we define as critical to the stability of a nation. Number of incidents dropped from 69 in the previous week to 62 during 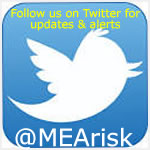 the week ending June 1, 2014.  It is an improvement, mostly coming from Libya, which has seen the entry into the conflict of a Western/Algeria-backed General Hafter. Hafter used to be an ally of Muamar Gaddafi in the 1980s when he led a Libyan military operation in nearby Chad. After a defeat in Chad, Hafter went to the United States where he lived as an opponent of Gaddafi, until his sudden return to Libya as a renegade General. Hafter’s impact on Libya security has been immediate, with broadening of the crisis, leading a spike in terror and conflict related events and deaths. Over the past week, we witnessed a reduction of such events, however, there has been an increase in the intensity of the remaining events, as if the conflict in Libya is showing greater concentration.

Other regions also showed spikes in intensity of events, including Mali where the defeat of the Mali government soldiers in Kidal has led to a spike of violence and increase in intensity of violent acts. 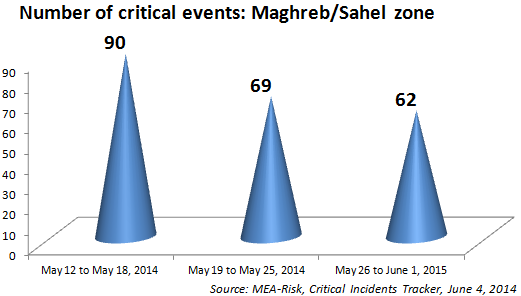 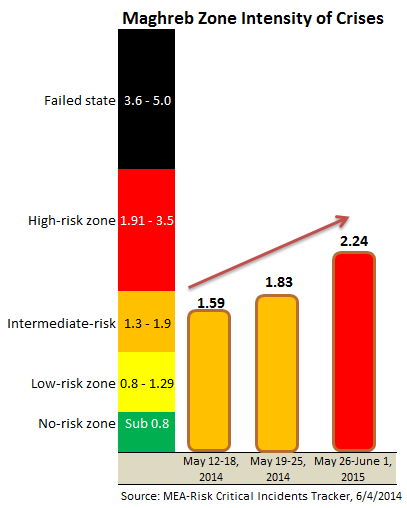 For the whole region, the crises intensity has increased by 22.4% to a level of 2.24. This is the mid-point between stable and completely failed region, putting now the entire zone as a HIGH-RISK ZONE (see diagram). Terrorism as a single category was a near 3-point high, but most other categories saw a spike in their level of severity. The exception was the economic/business category, which rated at the reasonable 1.8, or Intermediate Risk.

As noted above, Libya has been the most single important source of trouble. Among the most important developments leading to the worsening intensity level is the killing of a media editor, the attack on the Prime Minister’s house, the bombing by Haftar’s airforce of Ansar Al-Sharia positions in the east, a growing list of assassinations and abductions, the announcements made by several foreign nations that they are pulling their citizens, including more alarmingly Algeria and Tunisia, etc.

In Algeria, we noted the resumption of hostilities between tribes in Ghardaia. Arab and Berber communities have been facing each others for some time with deadly consequences. The anti-terrorist campaign of the government continued with the killing of alleged terrorists in Ain Defla, as an improvised bomb exploded in Tizi Ouzou. On the health and human front, we took note of two MERS cases reported by authorities involving two men who return from Umrah in Saudi Arabia.

The events in Mali where dominated by the defeat of the army in its battle against the pro-autonomy MLNA Touareg movement in the northern town of Kidal. Some 50 soldiers were killed, forcing the resignation of the defense Minister. Even among the Touaregs, infighting has broken out between rival groups with deadly consequences.

The crisis in Mali continues to affect humanitarian organizations. Two aid workers from Norway died from a mine explosion, while French hostage Serge Lazarevic appeared on a video.

Tunisia also had its growing share of pain, starting with a Jihadist attack against the Interior Minister’s home in Kasserine, causing the death of four security forces.  Terrorism activity and anti-terror offensives were on going, while the data on the economic front remained negative. Amid declining foreign direct investments (-19.3% in 1Q14), the government announced a decrease in fuel, sugar and bread subsidies.

In Morocco, the week’s events were dominated by anti-terror and anti-narcotics related events. On the anti-terror front we note the arrests of individuals accused of recruiting Jihadists, with 26 having been picked up for recruiting fighters for Mali. Six other people were referred to the Royal Attorney General for terrorism affairs in Rabat.  On the narcotics front, arrests and seizures were made related to cannabis and cocaine. A Brazilian national was among those arrested. On the economic front, the Moroccan government announced price increases for basic commodities starting August 1, a decision that is likely to increase social tension in the summer and fall seasons.

We note the entry of Niger at above level 2, driven by the mass arrests of political figures and their supporters.

In all casualties for the week ending June 1 reached 83, with most death occurring in Mali, then in Libya. Casualties for this most recent week saw a near 11% increase after a major drop of 55% in the previous weekly cycle. 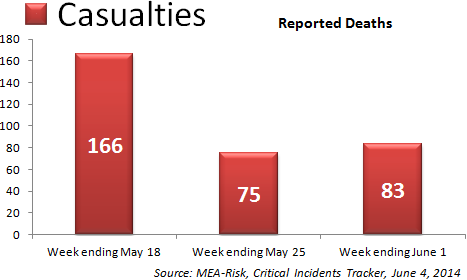