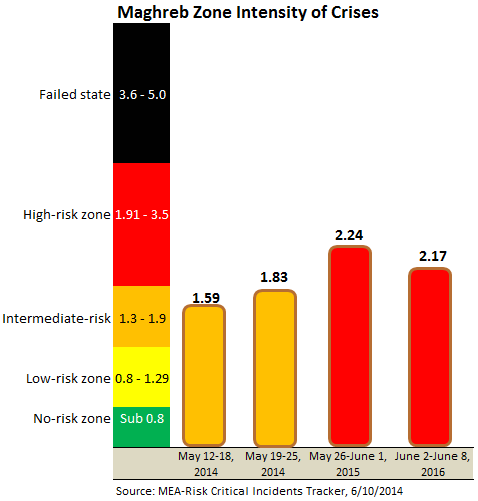 For the week ending June 8, 14, the combined disruptive events recorded by MEA-Risk’s Critical Incidents Tracker  showed an intensity that is within the “High-Risk Zone” level. Although the intensity of combined crises dropped by -3.1% compared to the previous week, it still settled at the dangerous red area of “High-Risk Zone” rated 2.17. That figure was better than the peak of 2.24 recorded in the previous week, a record for the past month.

Despite a sequential reduction of -3.1% in the level of intensity, we note that the number of incidents for the week ending June 8, 2014, grew by 25% to 78 instances, up from 62 in the previous week. At 83, the number of casualties was high, a near 11% increase sequentially. 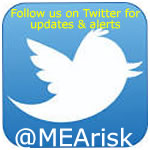 Libya remains where the majority of disurptive incidents have taken place. Among the most important events to note are the continued clashes involving Ansar Al-Sharia, “government” forces and militias. We saw a warplane hit a university in Benghazi after renegade general launched airstrikes there. Outside of Benghazi, there were inter-communal clashes in Sebha. The situation has gotten so drastic that many foreign governments recalled their citizens, including the governments of neighboring Tunisia and Algeria, and as far away as the Philippines and the US. The political scene was no better. A Congressman was abducted in Tripoli, a cabinet Minister resigned, renegade General Hafter was almost assassinated, a mass grave outside Tripoli was discovered, a Red Cross official was gunned down, and the list goes on.

In nearby Tunisia, a cat-and-mouse exercise is underway pitting the military versus the insurgents. Terrorist training sites are reportedly active in the Mont Salloum. Clashes have taken place in Jendouba, while police arrested eleven members of Ansar Al-Sharia in Gafsa. Meanwhile, the Tunisia Military maintained their blockade of Ain Debba, near the Algeria Border, while expanding their clean-up operations to the Northwest.

In Algeria, there have been arrests of two alleged terrorists near Tizi Ouzou and one killed in Bouira. Ethnic clashes in the M’Zab region continue to wreck havoc there, where 5 individuals were arrested and 11 police officers injured in fresh Ghardaia clashes.

The Algerian security forces have been busy on the anti-narcotics front. One ton of treated hashish was intercepted in M’sila, 400 kg of hashish seized in Tlemcen, and another batch of 250kg of Hashish in Oran. On the health front, two cases of MERS-CoV were reported in Tipaza and Tlemcen. On the regional level, local media reports that Algeria’s Special Forces have been deployed to tackle AQIM in Libya, information that have been rejected by a government spokesman. We, at MEA-Risk believe that indeed commando operations by the Algerian military are indeed happening outside of Algeria, including southern Libya.

Down in the Sahel zone, two European aid workers were killed in North Mali, Jihadist Fighters in Mali have set up Commando team to hijack Fuel trafficking networks, a French hostage appeared on TV, Qatar continues to seek to influence events in the region by funding French military helicopters to Mali. In nearby Niger, there is a possible 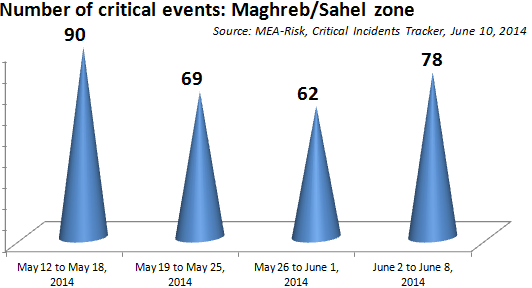 le investigation on an alleged poisoning attempt of the Head of Parliament, who is a political foe to the President.  Opposition figures and members of Moden Lumana were also charged for Threatening State security.

Morocco has been relatively quiet. We noticed that the police Intervened in the contested Western Sahara to suppress a demonstration that was pro independence. Moroccan police seized 16 tons of Cannabis set to be exported, and residents of the oldest Casablanca shantytown clashed with police over demolitions. 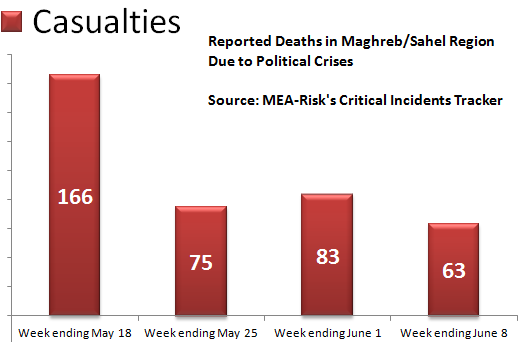