The apparent easing in political tension in Algeria post-12 December 2019 election is not evidence of a return to normal and the end of the anti-regime protest movement.  The appointment of Tebboune as president after a massively rejected election, has forced a lull in the Hirak movement, which is now looking for new mechanisms to confront the regime through peaceful means.  So far the Tebboune administration has proven to be unable to impose itself above the military command, which continues to drive the political agenda behind the scene.  Promises made by President Tebboune to de-escalate with the release of political prisoners did not materialize.  Repression continues, as scores of political prisoners are kept in prison and many more protesters are arrested on the weekly basis. The two protagonists are now stuck in their positions, while former operatives of the Bouteflika regime seek new ways to regain the momentum.

On the Security Front: The military command has remained quiet with its new interim chief, General Chengriha refraining from giving speeches like his predecessor did. There are efforts underway to reorganize both the intelligence services and the structures and leadership of the defense forces. However, there has been a reversal in the fate of the officers who have long been loyal to the jailed former intel chief General Toufik Mediene, who appear to be recalled to hold senior positions in the intelligence services. This reversal may mean that some of the foes that the late General Gaid Salah imprisoned may be released from prison and could return to active duty, against the will of the Hirak movement.  This in turn, promises to reignite anti-regime sentiment in the Hirak movement.

On the Economic & Social Front: The Algerian economy remains vulnerable to oil price volatility and 2020 looks set to be a difficult year for the country’s economy.  So far, President Tebboune has failed to provide the contours of a pro-growth economic policy.  The president’s team, which was assembled at the last minute and is expected to be reshuffled soon, appears unable to article a program that would enable effective creation of business, jobs and new industries. One of the bottlenecks is the financial sector, which remains weak and largely irrelevant in the Algerian economic context. Given the explosive political environment it is operating in, the financial sector is unlikely to undergo any reform in the foreseeable future to drive the Algerian economy away from its dependence on the oil sector and toward a broader industrial base.

The year 2019 was a banner year for Algeria, with the country showing a general drop in incident count, but also a shift in proportions between the general security counts and the politics-related incidents.  The year 2019 ended with 2,909 incidents tracked by MEA Risk LLC. Although the figure was down 13.6% from the 2018 statistic of 3,367, the decrease was not tied to any improvement in the country’s level of stability, but it was due to a shift from Human/Social-related unrest to political unrest. In 2018, there were more micro-riots and protests at the local level, which included road closures, sit-ins and localized demonstrations, but the figure dropped as local grievances shifted to the political domain with the population nationwide demanding regime change. 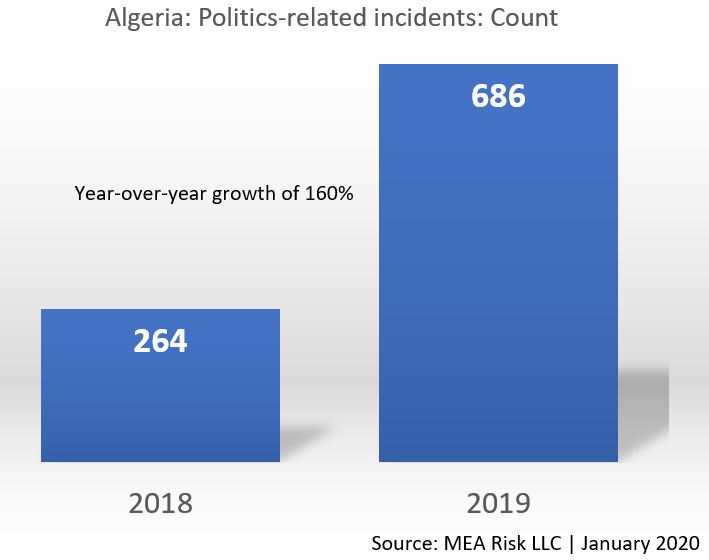 It is to note that the 2019 data does not include all the protests that took place during 2019. Adding the collective incidences of protests from 22 February to 31 December 2019, would have added another 100 incidents to the Politics category. If we counted the discreet protests separately and not as collective events, there were more than 1,000 such protests nationwide in 2019.  Because of the high figure, the data removed the protest statistics so as to avoid biased interpretations. Even with that in mind, the political crisis that accelerated starting 22 February meant that the Political category saw an increase of its share in the global incident count from 7.8% in 2018 to 23.6% in 2019.  Incidences in the Politics category rose by 160% from 264 in 2018 to 686 in 2019. This represented more than two major destabilizing incidents each day. In contrast, the Human/Social category, which captures unrest in the regions, dropped by 29.7%, as a result of local populations refocusing on political issues and joining the Hirak movement.

In 2019, there were eight acts of terrorism, down from 13 in 2019. There were also 458 military and security operations, also down 26.7% from 2018. These drops reflect the call from Al-Qaeda that as long as Algerians were engaged in political uprising, it would refrain from launching attacks. On the military side, the substantial changes that were imposed by the late army chief General Gaid Salah have led to a retraction of defense operations and the refocus of the security services on countering the Hirak movement under the Politics category.

In terms of casualties, the figures followed similar patterns, whereby the death toll from the combined critical incidents dropped by 53.6% from 556 in 2018 to 258 in 2019. As in the incident count review, there was a sig 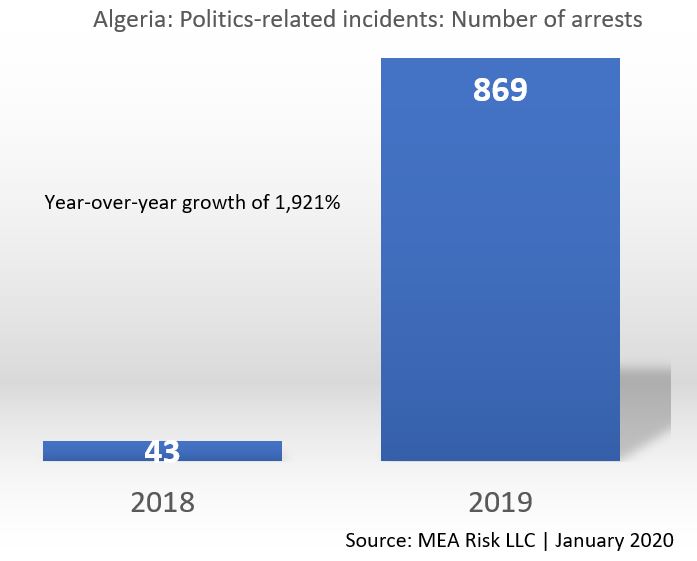 nificant retraction of the security services and the defense forces, which saw a 93% decrease in the casualty count  in the Security category from 315 to 21 deaths.

The most significant negative figure in the annual tally is the exponential spike in arrests related to the Politics category. In 2018, the Algerian authorities made 43 arrests of political activists. But in 2019, the figure reached at least 869 arrests attributed to the government’s repression of the Hirak protesters, as well as the scores of the political and business figures who have been jailed since February 2019. In the same context, arrests related to the Social category also dropped amid decreasing incident counts, down 39.5% to 7,589.

A category showing an increase in arrests is the Criminality category, which grew 5% to 5,154. The security services have escalated their campaigns against drug traffickers. There was also a spike in the interception and arrests of unlicensed gold miners in the southern-most regions of Algeria. The campaign to interdict gold mining is related to Algeria’s concern that Jihadi militants may infiltrate the artisanal miners.