This report details the security risks faced when operating in Algeria. The main focus will be on the security threats presented by local and international militant organizations, as well as Trans-Sahelian militant and criminal groups that are active in the Sahara. The report, however, will extend the analysis to provide additional pointers on political, social and economic factors affecting the Algeria Risk.

In general terms, Algeria’s 2016 outlook looks somewhat compromised and fraught with risk. The year will evolve as a continuation of 2015, but further weakened by low oil prices and the socio-economic effects as a result of these low prices.  The country is facing more external and internal inhibitors to stability, security and development than drivers. There are many concerns that foreign companies should consider relative when forming their views of the Algeria outlook. One of the main concerns, as highlighted in this report on the security front, is Algeria’s the proximity to Libyan border, exposing it to smuggling and militant groups. 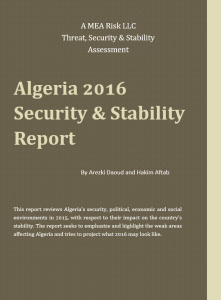 The Maghreb region, in which Algeria belongs to, and the Sahel region, which borders Algeria to the south, harbor a number of dangerous militant and criminal groups, which have taken advantage of the Arab Spring, political and social conflicts to accelerate their operations, and expand their influence.

Despite being largely spared from the Arab Spring unrest, Algeria is still vulnerable to its own domestic internal issues, starting with the over-exposure of its economy to the volatile oil market, and the murky political environment that puts the country in a permanent state of crisis.

With the oil prices sustaining their downward trends, Algeria is expected to face very difficult budgetary and spending environments in 2016. The decrease in oil-related revenues will force Algeria to put in place severe spending restrictions that will likely worsen social discontent. On the political front, the post-Bouteflika transition and the ongoing illness of the President are creating a crisis of leadership, highlighting deep constitutional weaknesses, and perpetuating the endemic state of corruption, with bureaucratic obstacles preventing any meaningful economic progress.

Externally, the instability of its neighboring countries represents also an immediate threat. The prevailing lawlessness and turmoil in Libya have allowed the Islamic State (IS) to establish a stronghold in the coastal city of Sirte (Libya), with the aim to gain ground in Libya and expand to other countries in the region from there. It is possible that their activities will inspire some domestic Algerian groups to attempt attacks. This occurred in Tunisia, where militants who pledged allegiance to the militant organization carried out three major attacks this year. Al-Qaeda in the Islamic Maghreb (AQIM) and al-Mourabitoun are also major threats inside Algeria but also in Northern Mali, where they are believed to be based.

Despite efforts by the authorities to reinforce security at the border areas, Algeria’s security situation remains dependent on the success of its neighbors to stop the operations of transnational militant groups and criminal gangs and to stem the flow of weapons from Libya which have enabled regional terror groups to equip and train for offensive operations. Regional cooperation is a must, although up until now the only successful bilateral security initiative is the one linking Algeria to Tunisia over the monitoring and security enforcement along their common border. Recent efforts to create a joint Sahelian intelligence system and coordinated military operations with Mali and Niger have failed and collapsed when the French military forces intervened in Mali and increased their presence in Niger and Chad.

The instability in Libya and Mali makes the threat picture complicated vis-à-vis the regional dynamics. The security restrictions imposed by the Algerian government lead to a reduced visibility of the threats for multinationals operating in the Deep South, leading them to be completely dependent on the national security forces to dismantle such threats.

There is a distinct possibility that in the near future militant groups will be in a position to conduct, or attempt to conduct high impact attacks in some areas of Algeria. The sheer size of the territory the authorities are responsible for makes a total military coverage impossible and attacks more easily executable.

Not a customer yet?