Instability in the Maghreb/Sahel region remains high. The week ending June 15, 2014 was a continuation of the previous week cycle, keeping the entire region within the “high-risk zone” category. The number of casualties from the turmoil in hot spots like Benghazi and northern Mali has been both high and stable compared to the previous three weeks. For the whole region, the Analysts at MEA-Risk’s Critical Incidents Tracker service inventoried 72 deaths, compared to 63 in the previous week and 83 prior to that. That was a 14.3% increase in casualties week to week.

In all, the region recorded 76 events that have a direct impact on the stability of one or more of the region’s countries. Although that

was down nearly 3% from the previous week, it is still a very high number of events, when looking at past period data.

The intensity of events combined reached a new high, at 2.25, or 3.7% increase from the previous week.

In analyzing the data, we noticed an interesting trend. The vast majority of the casualties recorded in this past week was the result of military action. Indeed 75% of the death toll are tagged to the category of “Security and Defense”. In previous periods, the terrorist category held a substantial share of casualties.

How to explain this trend?

There is growing evidence of a concerted multi-national effort to root out insurgents from the region and prevent them from causing more destabilization. The region’s militaries have been reinforced by special forces from Algeria, France, Egypt and the US to contain the insurgents and degrade them. These special forces have essentially partnered with General Khalifa Haftar, who has been at the forefront of anti insurgent offensive independently from the infective central government, and which has claimed the lives of dozens of alleged Jihadists. As the anti-Jihadist offensive continues, essentially targeting Ansar Al-Sharia and Al Qaeda affiliates, we notice the death tolls from the Security/Defense category increases as a result. We do categorize the Haftar position as part of the Security/Defense category. 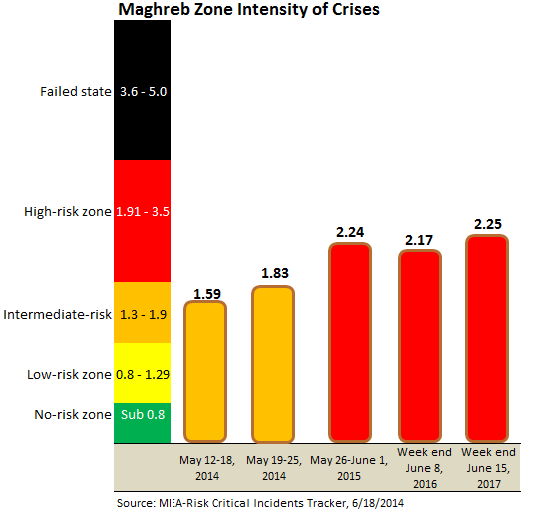